Take-Aways From the Apple Keynote 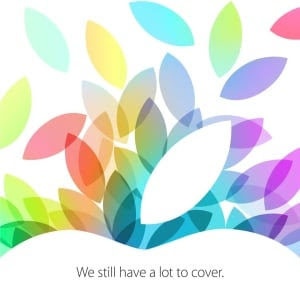 I just finished watching the one and half hour keynote that was put on by Apple today. A couple of things struck me, as this is really the first keynote that I've watched in the Tim Cooke era.


But nobody really cares about my presentation skills; so what did I see?

They started out with some statistics in typical Apple form.
Next up was the start of what everyone is really wanting to hear about: new products. They started out with OSX Mavericks, which is the operating system for their Mac lineup. For that they brought our Craig Federighi, VP of Software Engineering. I will say that I am excited to give this one a test drive, some of the improvements sound pretty amazing.
Next up was Phil Shiller, VP of World Wide Marketing to introduce the new MacBook Pros. This was your typical hardware announcement. It was mostly packed with numbers that really don't mean much to most of the public, because nobody really understands most of it. I will boil most of it down for you in that both the 13" and 15" models are thinner, more powerful, faster and have better battery life. These will start shipping immediately, as in today. What was really surprising, and "Apple-like" about this portion of the announcement is that they are dropping the price of the MacBooks by $200. This means that the 13" model will start at $1299 and the 15" model will start at $1999. The price tag is still a little hefty, but certainly much closer to a comparably priced PC, and you won't have to replace it every couple of years.

Phil stayed on stage for the announcement of the new Mac Pro. This is a product that tech professionals have been praying for. This is the point where I kind of zoned out, mostly because I don't think that I will ever have a need for a computer with that much horsepower or the $2999 that it will take to purchase the base unit (that doesn't include input or output devices). But there is a community that is super excited about them, and justifiably so. One thing that did catch my eye about this product is that it will be assembled in the United States. It is nice to see that manufacturing is not a lost skill in the good old US of A.

Eddy Cue, Senior VP of Internet Software and Services took the stage next to go over improvements to iLife and iWork. Now this probably won't interest most people until you get to the end, so you have to keep reading (or just skip the the end of the section and then come back to read the rest of the paragraph.) All six of these products (iPhoto, iMovie, GarageBand, Pages, Numbers and Keynote) have an updated user interface (UI). They are now more intuitive (which I for one am excited about) and user friendly. Where it gets exciting is that there is now going to be real-time collaboration available in the iWork apps through iWork for iCloud Beta. So now you will be able to send someone a link of a Pages document, they can open it in iWork for iCloud Beta (no they don't need to be a Mac user) and you can both make changes to a document in real time. Can you say more functional Google Docs competitor. But even that isn't quite as exciting as the price. Yup, you guessed it, they are all free (with the purchase of a OSX or iOS device).

The last catch kind of throws a monkey wrench in it for me, since I have already paid for most of these apps on both platforms, but where this has far reaching ramifications is in enterprise. When most big businesses buy a PC they also have to purchase a license for Microsoft Office, which adds about $250 to the cost of device. Once you throw in anti-virus license the total cost goes from $600 to around $1000. For $200 more you can get a Mac that will have all of the software included, and work seamlessly with company iPhones and iPads with almost no extra work. Suddenly Macs may be a little more attractive in the enterprise.

Speaking of iPads, Tim Cooke took the stage to talk briefly about iPad and it's iterations going through some of the numbers and showing a video. He then brought Phil Shiller back on stage for what everyone was really waiting for and Phil didn't disappoint. First he rolled out the all "new" iPad Air. Which is essentially the 4th Generation iPad that is thinner, lighter and more powerful. Here are some of the key take aways that I got:


Phil then addressed the iPad Mini, which didn't really offer up any surprises:
All-in-all I don't think that there were a whole lot of surprises here other than the price drop on the MacBook Pros. Most of this has been speculated on for a month now, and quite frankly sticks to what Apple does with these types of announcements. The thing that really makes me excited is the fact that there is now a clear path into the enterprise for Apple. The hard part about it is trying to get everyone to migrate to iLife and iWork because they are pretty radically different from the Office Suite.

What do you think? Anything surprising or interesting here? Is this the announcement that 5 years from now we will be able to say "That was the tipping point for Apple?"