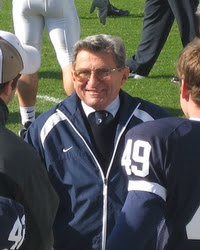 As most people know (unless you live under a rock) Joe Paterno died a couple of days ago. He was many things to many different people. To most that played for him he was a father figure, a role model, a coach and a mentor. To others, whether you liked Penn State football or not he symbolized winning, as he is the winningest coach in Division I NCAA Football history. While still for others, because of the events that lead to his firing at Penn State, he symbolized that which is wrong with college athletics and the power that they command.

All that pushed aside, and above all else, he was a father and a grandfather. This morning I saw an interview with his son Jay, who is currently an assistant coach at Penn State, on ESPN this morning. The interview discussed what JoPa meant to him, his family and his team. One of the most poignant parts of the interview for me was when Jay discussed how his son asked for a minute alone with JoPa, at which point he read Rudyard Kipling’s “If” to his grandfather. As I had never read the poem before, I Googled it and was very touched.

IF you can keep your head when all about you
Are losing theirs and blaming it on you,
If you can trust yourself when all men doubt you,
But make allowance for their doubting too;
If you can wait and not be tired by waiting,
Or being lied about, don't deal in lies,
Or being hated, don't give way to hating,
And yet don't look too good, nor talk too wise:
If you can dream - and not make dreams your master;
If you can think - and not make thoughts your aim;
If you can meet with Triumph and Disaster
And treat those two impostors just the same;
If you can bear to hear the truth you've spoken
Twisted by knaves to make a trap for fools,
Or watch the things you gave your life to, broken,
And stoop and build 'em up with worn-out tools:
If you can make one heap of all your winnings
And risk it on one turn of pitch-and-toss,
And lose, and start again at your beginnings
And never breathe a word about your loss;
If you can force your heart and nerve and sinew
To serve your turn long after they are gone,
And so hold on when there is nothing in you
Except the Will which says to them: 'Hold on!'
If you can talk with crowds and keep your virtue,
' Or walk with Kings - nor lose the common touch,
if neither foes nor loving friends can hurt you,
If all men count with you, but none too much;
If you can fill the unforgiving minute
With sixty seconds' worth of distance run,
Yours is the Earth and everything that's in it,
And - which is more - you'll be a Man, my son!

This should be required reading for every boy in middle school. If you hope to become a man these are sound rules that should govern every man’s life, not only in fatherhood, but also in business and life in general. At the moment that he read this JoPa’s grandson was more of a man that most.
Posted by Unknown at 3:20 PM